Similar to the other bots from Steve Davidson and Winning More, it uses a progressive staking system and aims to make a target profit from each football match.

We asked Dave to give Magic Soccer Bot a trial run and report back with his results.

Installation is straightforward and, once installed, you're required to input a key for initial access. This key is massive and I recommend that you copy and paste if possible as it is not easy at times to differentiate between letters and numerals.

There are two instruction manuals with this bot. The first one contains the installation instructions and the other details the method that is going to be used.

There is no practice mode, so once you press the button you are risking real money.

There are a total of twenty tabs which means it's possible to trade up to twenty games at a time. The bot cycles through each tab waiting for a bet to be settled before moving on to the next. 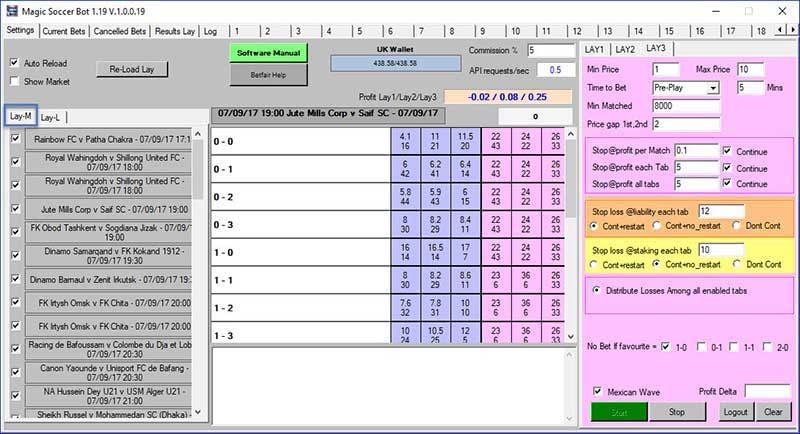 On the sales page there are results for six different strategies that have been tested using the bot, but bear in mind that currently the bot can only run three strategies at once.

The reported results are as follows:

The software has a similar interface to other bots developed by Winning More. If you have ever used Auto Profit Soccer, for example, you will notice a lot of familiar features.

This particular bot is designed to lay scores in the football correct score markets and comes with a built-in recovery staking system. Although the bot only places one lay bet per game, it can bet on several games at once due to the tab system.

There is a "stop loss" setting available to prevent stakes becoming too high.

Magic Soccer Bot will only work on Windows based systems but if you're a Mac user, then a VPS solves that issue.

We recommend running betting bots on a VPS (Virtual Private Server). We use Tagadab which is fast, reliable and recommended by some of the best bots on the market.

During Dave's first month, he made a small loss of 5.4 points.

He said, "It is fair to say that I am still experimenting with the settings for this to try and find an optimum. For the first month as suggested, I excluded one particular score line and for the next month, I propose to exclude a further score line from the selection process and see how the results go."

"I have deliberately set the match liquidity high so as to get matched whenever possible and this has resulted in a number of qualifiers with low liquidity being excluded. It is also right to say that a fairly large number of matches have been excluded due to not meeting the criteria set out in the manual."

"This bot will place bets for you automatically in the correct score market of qualifying matches and will attempt loss recovery in the event that the result goes against you. The bot tends to select common scores to lay and therefore, the likelihood of a loss is perhaps increased and it does take quite a few wins to recover from this."

Results for Months Two and Three

During Dave's second and third months, he made a profit of 21.9 points.

He said, "A nice turnaround at the end of month two saw me recover the loss from month one and bank an additional 7 points profit on top (after Betfair commission)."

"In line with the vendors suggestion, I excluded two of the correct score choices in the second month's selections but did not alter any of the other criteria. The result of this was a reduction in the number of selections made by the bot but a turnaround in fortunes as regards profit."

"It's still fair to issue the warning that this bot operates on a loss recovery system and a couple of losses can trigger quite large bets into the system. Recovery from such losses can take some time as this is a laying system and you are therefore only getting your stake back (less commission) in the event of a win."

"Finally, for month three I excluded a further correct score line as suggested, and the results saw the profit rise from 7 points to 16.5. Not a huge increase but nevertheless, going in the right direction."

"Obviously with three correct scores excluded from the selections, the number of qualifiers dropped again quite dramatically but, there were fewer losers."

"I stated in my initial overview that it would be pointless to list my qualifying matches as the slightest alteration to the bot settings will drastically alter the games selected. It is also fair to say that in month three, numbers of matches selected were still quite large."

During our three month Magic Soccer Bot review, Dave made a profit of 16.5 points.

The review didn’t get off to a great start but, after making some adjustments to the filter settings within the software, Dave was rewarded with a profit in each of the following two months.

Dave said, "I would put this system into the pass category but caution very strongly that losses can be quite high at times and large bets are placed to try and effect recovery. During the trial, my worst position was a loss of 27.75 points which took a long time to recover from."

"If you decide that this might be for you then I suggest that you read the manual very thoroughly until you fully understand what it is you are doing and then check and double check your settings. There is no practice mode with this so you are risking real money from the beginning."

Little Acorns Gold Review: Horse Racing Lay Betting System
Little Acorns Gold is horse laying system, with all bets sent out to you daily. We made consistent profits during our eight month review and awarded a pass!
Read More
Football Bankbuilder Review: Lay Betting System
Our second trial of Football Bankbuilder turned out to be even better than the first one! Not only do we stand by our original rating, we feel even more confident about the system now.
Read More
PounceBet Auto Pounce Review: Automated Betfair System
PounceBet Auto Pounce is an automated Betfair betting app that trades profitable opportunities in-play. We made £861.93 profit from it in our four month review!
Read More
Dobbin Day Review: Horse Racing Trading Software
After finding our feet in the first part of our Dobbin Day review, we managed to make a steady profit in month two and three, finishing with an overall profit of £26.01 to £5.00 stakes or 5.20 points. This works out as a modest 10.4% increase to our £250 starting bank.
Read More
Bonus Accumulator Review: Unlock The Profits Of Casino Offers
In one month we made an easy £364.90 profit from Bonus Accumulator by completing casino welcome bonuses and reload offers.
Read More
Inplay Trading Review: Football Stats Scanner
Inplay Trading membership allows you to access a scanner tool which displays live, in-play stats for many football matches at once. Here is our review.
Read More