We have reviewed Early Odds twice now and achieved excellent profits both times. In fact, we made in excess of 200 points profit at the available odds (we checked every one).

Despite the service focusing on taking early value prices, the Betfair SP results also proved to be profitable. Trial one made 58.91 points profit and trial two achieved 20.58 points profit.

All the results for both trials are below or click here to get started with Early Odds.

Early Odds is run by Max, a computer programmer and professional horse racing analyst from Montenegro.

He spent a long time building up his own database and developed software to conduct analysis. He is now able to calculate what he believes the odds should be and compare them with what the bookmakers are offering in order to find value. 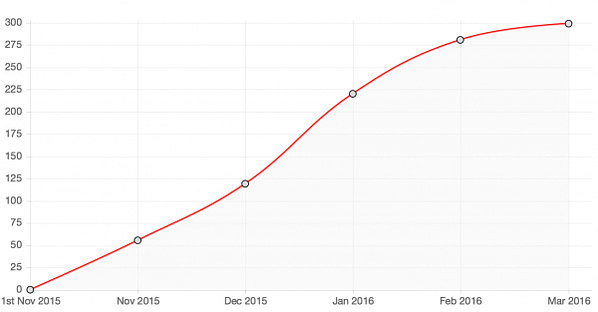 Max sends out an average of 5 win only tips per day, which are mainly sent out before 10.00pm the evening before races. He advises a 120 point starting bank and all selections are to be backed using 1 point level stakes.

We did sometimes receive extra selections the next day. We were always forewarned if there would be more tips to come, but there was no set time.

I don’t claim to have secret insider contacts at race courses or psychic abilities! What I do have is programming skills and a monetary fascination in the sport of kings.

I have used my skills and the desire to profit to develop a cash winning formula. Any emotion is stripped from the strategy and it has been working perfectly for years.

Key Stats for Both Trials

Results Graphs for Both Trials

As with all value betting, you must expect to experience some long losing streaks! We had a run of 20 losing bets in the row in the first month and you do need patience to ride out the storm.

As you can see on the trial two graph, it was a shaky start but things came good in the end. 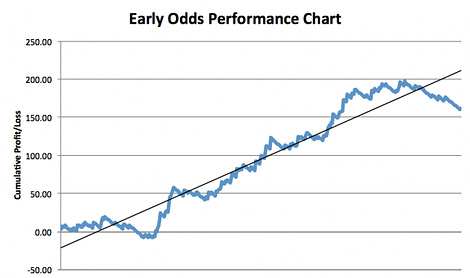 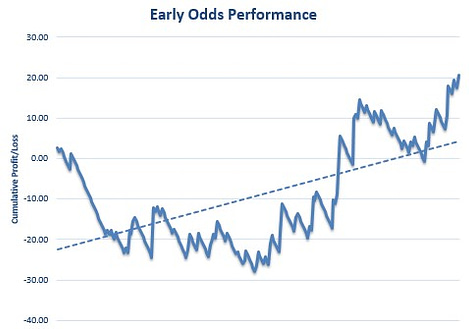 We got off to a great start in trial one, making 50.96 points profit during the first month.

Month two was even better and added a further 100.71 points profit to our bank. We had more than doubled our starting bank in just two months and all was looking rosy!

The third month was not as explosive, but still achieved a profit of 10.49 points.

We were able to get the required odds most of the time, but we did find that some of the bookies hadn’t priced their markets up yet so we were limited to which ones we could use. We could have waited a bit longer, but then there was the risk of the odds shortening.

The odds ranged from evens to 25/1 and we hit plenty of short-priced winners which kept the profits ticking over while we waited for a big one to land.

From time to time, we re-trial services to make sure that they are still profitable and worthy of our pass ratings.

Betfan had reported a profit of more than 300 points for Early Odds since the end of our first trial and an average profit of approximately 18 points per month, so that was very promising.

The stakes were still set to a level 1 point per bet and the tips were still sent out the evening before, with the occasional few bets on the day of the race.

We didn't enjoy such a good start this time around, losing 13.44 points during month one. Losing runs are absolutely normal with value betting and we were not too concerned so early on.

Having made a profit during two separate trials, we're very happy to recommend Early Odds.

The published long-term results have been consistently good with a profit of more than 800 points delivered at the advised odds and 148 points at BSP. During both trials we were able to match the suggested odds most of the time, so these numbers appear to be realistic.

There are no dodgy staking plans; it's a simple 1 point stake per bet.

It's great to see that Max is still delivering the goods and providing consistent profits to his followers. We can confidently recommend the service as a great addition to your betting portfolio.

PokerSnowie Review: Poker Hand Analysis & Coaching Software
PokerSnowie is advanced poker hand analysis software which advises optimal plays. It’s like having your own personal poker coach available 24/7.
Read More
Fantastic Eights Review: Horse Racing Tipster Service
Fantastic Eights is a horse racing tipster service which we have reviewed twice. We made 95.65pts profit the first time, then added another 341.75pts profit a couple of years later.
Read More
Race D Base Review: Horse Racing Statistics Software
Race D Base is ideal for analysing data and creating your own horse racing betting systems. It is essentially a database which compiles historical and daily data from a number of sources.
Read More
PlayScoop6 Review: Scoop6 Betting Syndicate Club
David Leslie from PlayScoop6 was part of a syndicate that won a huge jackpot just shy of £3.2 million! We tracked the club's performance in our review.
Read More
Russell Blair Racing Review: Horse Racing Betting Tipster
Russell Blair Racing is a horse tipster who sends out high odds selections each evening. We followed the tips for three months and banked 70.5 points profit.
Read More
Cleeve Racing Review: National Hunt and Flat Horse Race Tips
During our three month review of Cleeve Racing, we banked 56.94 points profit at 30.9% ROI. We did not hesitate to award this horse racing tipster with a pass and, exclusive to Goal Profits, you will get a 25% discount at Cleeve Racing!
Read More

Early Odds is a value horse racing betting service which banked a profit both times we trialled the results. We highly recommend taking a look at this tipster.