The 20 Minute System is a golf value betting system from Mike Cruickshank, designed to take just 20 minutes a week to use.

The system comes with it's own web-based software that scans the golf markets to find all the bets for you. It also has a video tutorial and quick start guide, but it's really quite simple to use.

It's very similar to the Each Way Sniper software, another of Mike's winning systems, only it has been adapted to fit the golf betting markets. If you have used EWS before, you will quickly get to grips with it.

One of the cool things about these systems is that they will work on gubbed accounts. It's a great way to make use of those old bookie accounts as you can get started with stakes as small as 50p each-way. 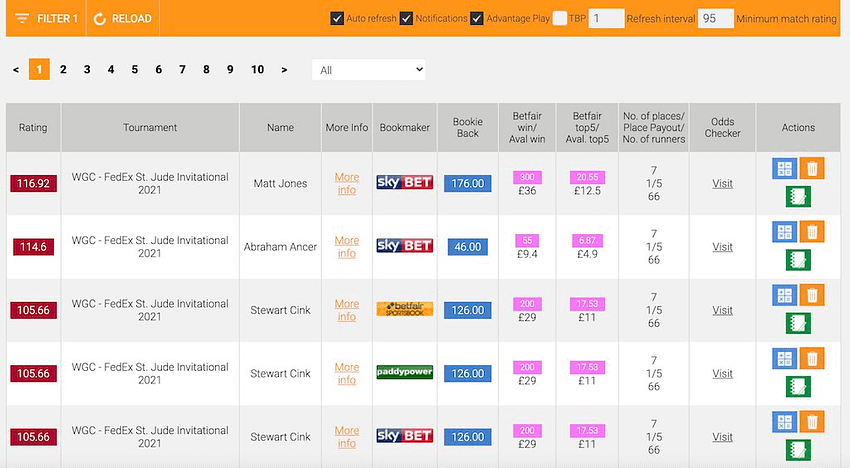 There are just a couple of filters to apply and Mike has advised to use a starting bank of 200 points and play 0.5 each-way bets.

Bets are mostly available from Tuesday to when the tournaments start on a Thursday, so it does seem plausible that it would only take up to 20 minutes per week to use the system.

We recorded our results using the system for just under two months and were able to make a fantastic 34.47 points profit. The ROI worked out at a massive 42%!

In total we had placed 82 bets and although only 7 of those bets returned a profit, many of the bets were at high odds. We actually hit a 45/1 winner in the first week, getting our review off to a great start.

We also had places come in at 300/1 and 175/1, which would have made excellent bets to trade during the tournament if you're that way inclined.

We found the 20 Minute System simple to use and as advertised, it really only took around 20 minutes per week to find and place the bets.

It was just a case of checking the software on a Tuesday and Wednesday, placing any qualifying bets and then waiting for any profits to come in. The software made it easy to log bets, so that saved us a lot of time too.

Using modest stakes of £5 per point would have made us £172.35 profit, which meant that the initial outlay for the system was paid for and anything else banked during the remaining 10 months would be pure profit.

We had no qualms about awarding the system with a "pass", it was an easy decision!

Super Sports Bot Review: Automated Multi-Sports Betting Bot
Super Sports Bot automates betting for many sports including tennis, cricket and American sports. Our reviewer made £47.86 profit in just two months.
Read More
ITV Racing Tips Review: Value Bets for Big TV Race Meetings
ITV Racing Tips concentrates on the big TV meetings and includes detailed analysis for each bet in every race shown on ITV. We banked 51.55 points profit (29.8% ROI) during our review and the service was also profitable at BSP.
Read More
Clear Bonus Profits Review: Matched Betting Service
In just three months, Ollie barely touched the surface of what was available at Clear Bonus Profits but still managed to bank a healthy profit of £1,400.86. That works out at an impressive average of £467 profit per month.
Read More
Assured Soccer Profits Review: Correct Score Trading System
Assured Soccer Profits is a low-risk football trading strategy which focuses on the Betfair Correct Score market. We tested it out and here is our full review.
Read More
Football Accumulator Tips Review: Acca Betting Service
Football Accumulator Tips delivered consistent profits at an impressive 20% ROI. That was higher than any other football tips services that we had reviewed to date.
Read More
BF Bot Manager Review: Automate Your Betting/Trading Systems
BF Bot Manager is an application that allows you to design and run bots to automate your betting and trading systems using custom sets of rules and conditions.
Read More