John Baker, who runs the Banker Bets tips service, has come up with an accumulator strategy for Value Picks.

He back-tested it on the previous banker bet selections and found a method that would have doubled the amount of profit and quadrupled the ROI.

There were a range of markets covered including match odds, draw no bet, double chance, Asian handicap, both teams to score and over/under goals. They were mostly short odds selections at a minimum of 1.50 and an average of 1.75.

A 40 point bank was recommended and stakes were advised between 0.5 and 2 points, but most of the bets will be a 1 point stake. The odds quoted were the best available and the average across several bookmakers.

Although we made an overall profit during our review, month one was a poor start.

We recorded a loss of 7.11 points at the available odds at an ROI of -11.6%. We were able to beat the average odds advised in the tip emails, which would have given a further loss of 1.03 points.

It was a tricky time of the year for football betting with the Winter leagues settling in and there had also been an international break to contend with. The advised World Cup Qualifier bets gave us a loss of 3.14 points, making them responsible for nearly half of the total loss that month.

Overall that gave us a loss of 3.76 points since starting the review, however, it was good to see the service had started to make a recovery and we hoped it would continue into month three.

Month three was the best to date with an impressive profit of 15.02 points at an ROI of 29.7% at the odds we were able to obtain. After the slow start to the review, we were pleased to see things were heading in the right direction.

John had stated that he was highly confident results will continue on the upward curve as the main European season grew longer with more and more reliable form to analyse.

The service achieved another profit in our fourth month of 5.82pts giving 3 out of 4 profitable months.

Although it was a slow start to our review, the service really hit its stride when the season was in full swing. Being able to make a profit from selections that are mostly "odds on" can be incredibly difficult, but John managed to find value in some of the most saturated markets.

The two services were very similar in how they operated, with tips being sent out daily by email along with the best and average odds available at the bookies. They both covered major worldwide football leagues all year round, including international tournaments.

The official results were updated regularly on the website and they were based on the average odds available, which meant it was quite easy to beat them as there would often be higher odds around.

We loved this honest approach - there was no trying to inflate results using odds only available at some dodgy European bookie that no one has heard of. We were able to find odds easily at the main UK bookmakers or exchanges.

We had been following John Baker's Banker Bets Value Picks service since the beginning of the winter football season and after witnessing 3 out of 4 profitable months, a total of profit of 17.08 points and a 42.7% increase to our bank, we were happy to award a pass rating. 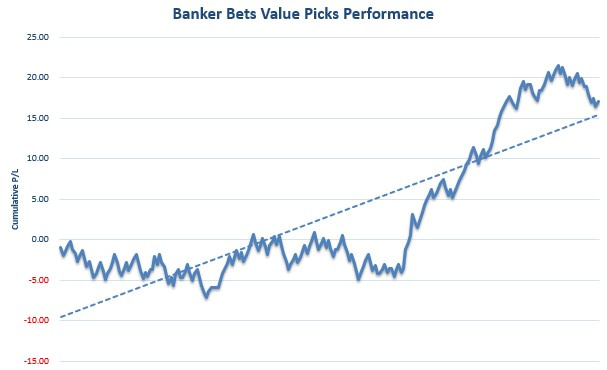 Super Sports Bot Review: Automated Multi-Sports Betting Bot
Super Sports Bot automates betting for many sports including tennis, cricket and American sports. Our reviewer made £47.86 profit in just two months.
Read More
Assured Soccer Profits Review: Correct Score Trading System
Assured Soccer Profits is a low-risk football trading strategy which focuses on the Betfair Correct Score market. We tested it out and here is our full review.
Read More
The Value Machine Review: Horse Racing Betting Software
At the end of our Value Machine review we achieved two out of three winning months, finishing with a total profit of 43.37 points at an excellent ROI of 19.1%.
Read More
Fairbot Review: Betfair Exchange Trading Software
Our Fairbot Review explains how this popular Betfair trading software works and how it can give you an edge in the markets. There's an exclusive deal too!
Read More
Russell Blair Racing Review: Horse Racing Betting Tipster
Russell Blair Racing is a horse tipster who sends out high odds selections each evening. We followed the tips for three months and banked 70.5 points profit.
Read More
Banker Bets Value Picks Review: Football Betting Tips
We have been following John Baker's Banker Bets Value Picks service since the beginning of the winter football season and after witnessing 3 out of 4 profitable months, a total of profit of 17.08 points and a 42.7% increase to our bank, we are happy to award a pass rating.
Read More

We reviewed Banker Bets Value Picks and achieved 3 out of 4 profitable months, with a total of profit of 17.08 points equalling an impressive 42.7% bank growth.