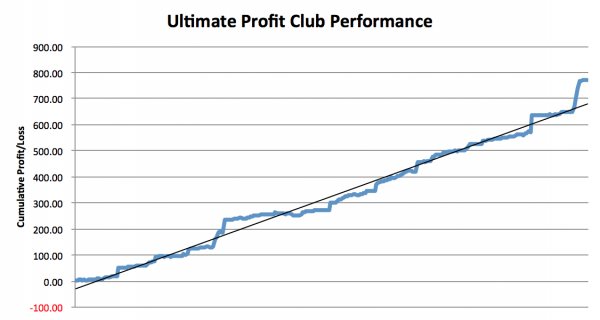 Jolly Lock IP Review: Stop Those Snooping Bookies
Have you ever been bonus banned, had stakes limited or even had your account shut down at an online bookmaker? Well, Jolly Lock IP is a virtual desktop that has been designed to combat this problem by completely blocking any spyware and protecting you from the bookie’s prying eyes. Click here now to read our full review.
Read More
Profit Maximiser Review: Low-Risk Matched Betting
Profit Maximiser shows you how to profit from sports/casino/bingo promotions. During our review, we banked £391.12 profit and it really couldn't have been any easier!
Read More
Banker Bets Value Picks Review: Football Betting Tips
We have been following John Baker's Banker Bets Value Picks service since the beginning of the winter football season and after witnessing 3 out of 4 profitable months, a total of profit of 17.08 points and a 42.7% increase to our bank, we are happy to award a pass rating.
Read More
Predictology Review: Football System Builder and Tips
Predictology is a football betting strategy builder that allows you to analyse 300,000+ matches to find profitable bets in a matter of seconds.
Read More
Merlin Results Radar Review: Treble Betting System
In our Merlin Results Radar review we were able to make a profit of 47.82 points from 12 sets of trebles, making it a "pass" for this excel based betting system.
Read More
The Judge Review: Profitable Greyhound Betting Tipster
Greyhound racing tipster 'The Judge' boasts impressive long-term results. During our three month review, we banked 79.56 points profit at 11.2% ROI.
Read More