Football Bankbuilder is a lay betting system which claims that you can turn £1,000 into more than £30,000 in just three years.

Before our review commenced, the system had been tested by authors Matt Fisher and Andrew David for five years and they reported only one losing month in that time.

We asked our reviewer, David, to put Football Bankbuilder to the test with a three month trial. He followed the instructions as detailed in the 32-page manual and placed the lay bets at Betfair with no trading involved.

The suggested bank at minimum £2 stakes was £352 and the authors indicated that 1-3 bets per day was best.

During the first month, David used the "High/Low" algorithm which produced £64.68 profit.

Where the system suggested "LOW" his stakes were a straight £2 bet and where it showed "HIGH", the stakes were increased to £6.

During the second month, David followed the selection process algorithm which resulted in most of his bets being placed for minimum stake.

This was the third winning month in a row for David. 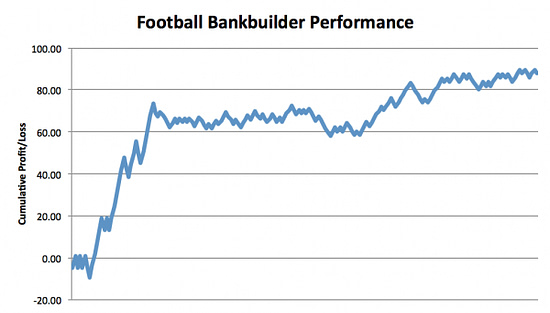 This worked out as 43.92 points profit from the £2 stakes and, as you can see below, increasing stake size would have had a dramatic effect on returns:

Football Bankbuilder is very much a set-and-forget system and ideal for anyone who is short of time. It only takes a matter of minutes to select the daily bets and place them.

Match selections are made by each individual user, so everybody using the system will have different results. The authors do suggest certain types of leagues and matches to avoid, which is helpful.

With a total profit of 43.92 points in the bank, Football Bankbuilder deserves to be added to our list of passed systems.

ImRigged Review: Horse Racing Tipster
After promising results from this horse tipster over at Tipping Gurus, we decided to follow the service for ourselves. Find out if we made a profit here.
Read More
Geegeez Gold Review: Racecard and Horse Racing Form Tools
Matt Bisogno and his team believe that horse racing punters deserve so much more. Introducing Geegeez Gold, a revolutionary collection of racecard and form tools.
Read More
Football Winner Review: Match Odds Betting Tips Service
It's not often that we come across a profitable football tipster, but Football Winner managed to make the grade and delivered a total profit of 71.8 points overall.
Read More
Pre-Match Trading Review: Football Scalping Tool
Pre-Match Trading is software which highlights potential scalping opportunities for football matches on Betfair. During our trial, Dave made £76.72 profit.
Read More
Profit Maximiser Review: Low-Risk Matched Betting
Profit Maximiser shows you how to profit from sports/casino/bingo promotions. During our review, we banked £391.12 profit and it really couldn't have been any easier!
Read More
Winning Footy Tips Review: Profitable Football Tipster
Winning Footy Tips banked 33.01 points profit (45.8% ROI) during our review. This football tipster offers a guarantee so you can follow risk-free for 60 days.
Read More

Football Bankbuilder is football lay betting system we reviewed for three months. Read our full review and see the profits made by this lay betting tipster here