Sports World is a multi-sports betting service which looks at earning consistent profits to build your betting bank.

The service covers a variety of sports, including football, NFL, golf, snooker, tennis, darts, rugby league, rugby union, cricket and the list goes on. We even spotted a rowing tip amongst the results!

Sports World have a selective approach, offering a maximum of one tip per day and an average of 16 per month. The tips are delivered via email between 9.00-11.00am and there is an email sent out whether there are any selections for the day or not.

A bank of 50 points is recommended and the bets are advised at stakes of 1, 5 or 10 points each.

Our Sports World review ended with a neutral rating.

Inplay Trading Review: Football Stats Scanner
Inplay Trading membership allows you to access a scanner tool which displays live, in-play stats for many football matches at once. Here is our review.
Read More
Race D Base Review: Horse Racing Statistics Software
Race D Base is ideal for analysing data and creating your own horse racing betting systems. It is essentially a database which compiles historical and daily data from a number of sources.
Read More
Fantastic Eights Review: Horse Racing Tipster Service
Fantastic Eights is a horse racing tipster service which we have reviewed twice. We made 95.65pts profit the first time, then added another 341.75pts profit a couple of years later.
Read More

The tips covered four sports, including cricket, rugby league, football and tennis. The cricket tips brought in the bulk of the profit, adding 7.33 points to the total.

Our 50 point bank had almost doubled in the two months that we had been following the service, with an increase of 99.4%.

We were not quite sure how the staking was decided as the majority of bets were staked at 1 point. There were also 5 point and 10 point selections, which we could only assume were based on the tipster's confidence.

We had our first small loss of 2.16 points during the third month, but it was no great concern and only meant a small decrease in the overall bank which still stood at 47.52 points (43.2% ROI).

Our worst month to date as we suffered a loss of 16.18 points at the available odds.

We were still in a good position for our review overall with a profit of 31.35 points.

We lost a further 4.18 points at the available odds and advised stakes.

Four losing months in a row, but we still finished with 14.27 points profit (6.3% ROI) for the review overall. 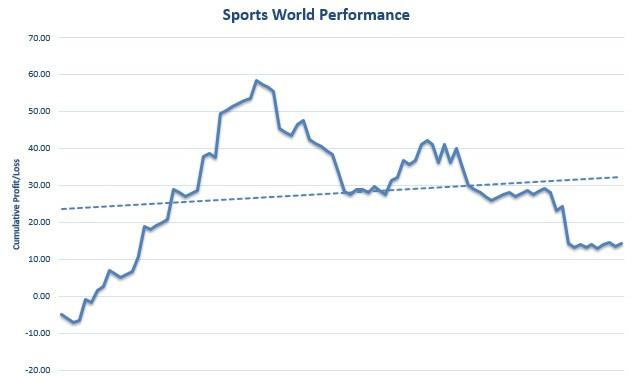 It was hard not to be disappointed after such a great start but the fact was, the service did deliver a profit overall. Because of the low quantity of bets, when the service was on a losing run it felt like it was going on forever.

It was an interesting service to follow with the range of sports that had been covered, some that we don't often look to bet on such as snooker and darts. The more popular sports to bet on such as football and tennis, however, returned the most profit.

Although we finished with a profit at the end of our review, we did not feel confident enough in the service to wholeheartedly recommend it. It was certainly worth keeping an eye on and we felt that a Neutral rating was fair.

Vision Racing Review: Horse Tipping Service
With 3 out of 3 winning months, we banked a total profit of 54.84 points at an ROI of 37.8% in our Vision Racing review and BSP results were even better!
Read More
TradeShark Tennis Review: Trading Guide and Daily Advice
TradeShark Tennis is a trading service that goes above and beyond, with a small one-off payment that gives you a trading mentor for life. Community and support seem to be the heart of the service, with Paul on hand to give advice along the way.
Read More
Cleeve Racing Review: National Hunt and Flat Horse Race Tips
During our three month review of Cleeve Racing, we banked 56.94 points profit at 30.9% ROI. We did not hesitate to award this horse racing tipster with a pass and, exclusive to Goal Profits, you will get a 25% discount at Cleeve Racing!
Read More
Profit Squad Review: Learn Matched Betting with Video Guides
Profit Squad is a matched betting service which features in-depth video guides for beginners as well as advanced strategies for making long-term profits.
Read More
5 Star Bot Review: Automated Betting Software
5 Star Bot is a web-based betting bot designed to automate bets for Betfair horse racing and greyhound markets. It is an ideal solution if you don’t have access to a VPS because it runs on its own server 24/7 and you can access it from any device.
Read More
RM Greyhound Tips Review: Professional Greyhound Tipster
The man behind RM Greyhound Tips has first hand experience of working at the tracks. He achieved 3 out of 3 winning months during our review to give us a profit of 45.82 points at 25.9% ROI.
Read More

Sports World is a multi-sports betting service which looks at consistent profits to build your betting bank. We followed the service for six months.