The Golf Profiteer is a golf betting service which covers PGA, European and Asian tournaments.

​It is an established service who have been running since Jan 2013. Tips are sent out once a week on a Wednesday, ready for the weekend tournaments.

The Golf Profiteer has achieved a strike rate of 32% and a return on investment of 25.56%. There have been some huge winners so far, including M. Manassero at the BMW PGA Championship at 69/1 and H. Mahan at the Barclays at 47/1.

A betting bank of 150 points is advised, with stakes set between 1 point and 6 points. They recommend setting 1pt at £20, but this is down to personal choice. Bets include Outright Winner and Place bets such as Top 10 Finish.

Our review of The Golf Profiteer ended with a fail rating.

The service had sent us bets on a weekly basis, well in time before the start of the tournaments. The advised odds were taken from Betfair, so we have followed suit and recorded our bets using Betfair odds and deducted 5% commission from the results. We were able to get the same odds the majority of the time.

Despite hitting a 13/1 winner, we did not finish the second month in profit. The month finished with a loss of 7.44pts at the advised odds.

This month the service had double the amount of winning bets than the first month of the trial, but 5 out of 6 of them were place bets at lower odds, so we weren’t able to pull back enough profit to get back on track.

It’s pretty much the same story as the last two months. There have been 7 winning bets out of 40, but they have all been place bets at shorter odds so we have yet another losing month.

In the last update to our review of The Golf Profiteer we had experienced our third losing month in a row, so we decided to take a long term view and come back in a further two months with an update of our results. Unfortunately, things had gone from bad to worse!

The service had a terrible time during month four, losing 64.33 points due to just 2 winning bets out of 70. In month five there was a further loss of 13.18 points, which left us with just 3.25 points from our 150 point starting bank. The final straw was a poor set of results from the French Open, which brought our review to the end of the road.

At the recommended £20 per point we would have lost over £3000 at this stage. 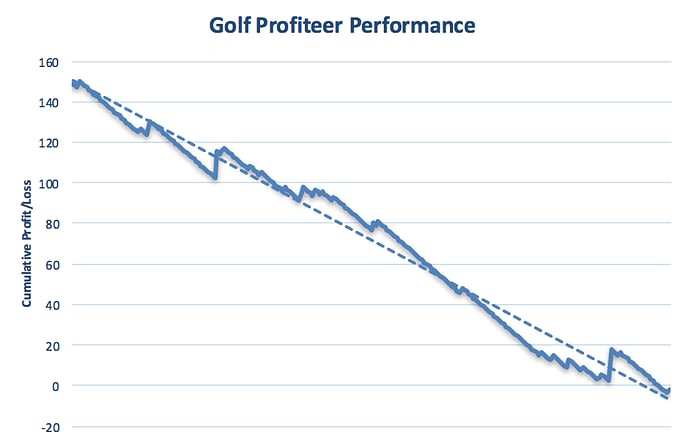 It's a shame to see The Golf Profiteer go in to the failed box, as we know the service has been around for a number of years, but, after five out of five losing months we felt we had no choice.

Perhaps with a larger advised starting bank and the lifetime membership option reinstated, it may be worth ploughing on and waiting for those juicy winners to come in. Unfortunately this service is not for us, so a fail it is.

Assured Soccer Profits Review: Correct Score Trading System
Assured Soccer Profits is a low-risk football trading strategy which focuses on the Betfair Correct Score market. We tested it out and here is our full review.
Read More
Russell Blair Racing Review: Horse Racing Betting Tipster
Russell Blair Racing is a horse tipster who sends out high odds selections each evening. We followed the tips for three months and banked 70.5 points profit.
Read More
Geegeez Gold Review: Racecard and Horse Racing Form Tools
Matt Bisogno and his team believe that horse racing punters deserve so much more. Introducing Geegeez Gold, a revolutionary collection of racecard and form tools.
Read More
Race D Base Review: Horse Racing Statistics Software
Race D Base is ideal for analysing data and creating your own horse racing betting systems. It is essentially a database which compiles historical and daily data from a number of sources.
Read More
OddsMonkey Review: Easily the Best Matched Betting Service
We have reviewed a number of matched betting services, but OddsMonkey is easily the best. It's easy to use, great value for money and there's even a FREE trial!
Read More
Each Way Sniper Review: Low-Risk Horse Racing System
Each Way Sniper is a low-risk horse racing betting system which exploits EW markets. During our one month review, we made £149.83 profit from 37 bets (only 2 losing bets).
Read More

The Golf Profiteer is a golf betting service which covers PGA, European and Asian tournaments. Click here to read our full four-month review of this tipster.